Prior to starting my in car sync said everything was up to date, inc maps F8.

The Ford website said I needed a sync update but maps was fine. Followed the instructions to the letter. Installed ok but didn’t write the log code so I had to pop the stick back in. Got the log second time around and uploaded to the Ford website. It’s now saying I need a map update. I’m assuming this will be to F9 that most updated to a while back? How would I know which one as I’ve read on here there’s been issues with the F10 (btw I have no idea what the F stands for)

It seems that this update has deleted previously saved settings such as my WiFi, Bluetooth connected phone, other user set options (ie the beeping sound on screen press). Is this normal?

If we need to do this for each update, what is the point in having an automatic software update button on the sync screen? I was hoping it would do it all whilst connected to my house WiFi.

My radio seems to have kept the presets. I use DAB and my little box icons have moved to the right of the screen. Some appear when on the audio page and some when on the home page, but not all and not on both.

Are these icons and info subject to the radio station transmitting them? I have the radio icon option on.

I am aware there is a thread on this aspect but thought it may be to do with the sync update. I have only scanned that thread as I didn’t want to confuse myself with a problem that I hadn’t (until now) encountered.

I’m downloading the map update but won’t install it just yet. Below is the screen on completion of the sync update. It means nothing to me. 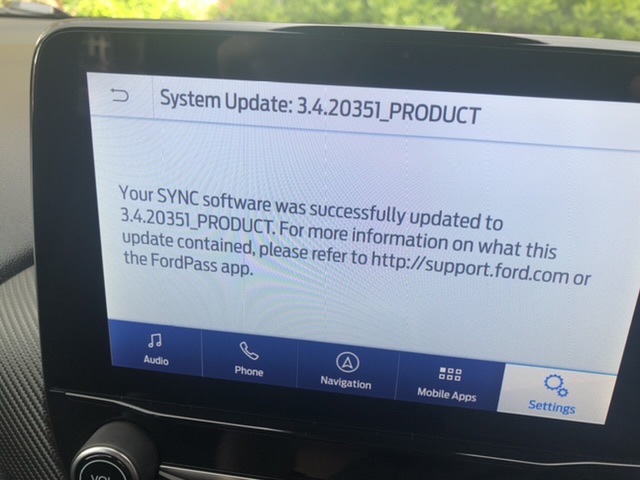 Good question re WiFi updates, I was thinking the same

The website offered me the sync update, but checking for updates over WiFi offered nothing saying it was up to date when it obviously wasn’t
Puma ST-Line X 1.0L Ecoboost 125PS 7 Speed Auto 2021 - Solar Silver - DAP/CP/HFPT/LED
Top

I’ve downloaded the maps but haven’t installed them yet as I need to sort out my 32gb stick as I used a smaller one for the sync.
Top

You won't get much OTA update wise, apparently it's not activated
PUMA ST-X Plus First Edition Plus in Agate Black with comfort pack

You’ve both lost me........old cars were so much easier. If the car started and no warning lights came on, we were blissfully unaware of any issues

Those were the days!

But as you say, old cars didn’t need these things (and fun to work on) and so it was never a concern (I guess the same could be said for an old Nokia phone vs an iPhone)
Puma ST-Line X 1.0L Ecoboost 125PS 7 Speed Auto 2021 - Solar Silver - DAP/CP/HFPT/LED
Top

Mike wrote: ↑
Sun Apr 04, 2021 7:57 pm
Got a notification to carry out sync 3 update, maps ok. Hopefully downloaded onto a usb and will try next time out in the car for a few miles.
Do any of you use a Mac, mine looks like it unzips the downloads when you click on them because it gives the option to compress them again?
Probably find out I have done it wrong

But you need it extracted so probably doesn’t matter

The usb needs to be empty and formatted to exfat with mbr partitioning (via disk utility, making sure the usb stick is the selected drive) before copying the files to it

Hi followed your instruction about auto unzipping, downloaded an unzip app and once downloaded unzipped the files, dragged and dropped onto the usb ( could probably have left the unzip ticked in safari ] as couldn’t get them to copy across like the Ford instructions said, then created another folder on the usb where I have put the 4 sync my ride files so I now have a folder with auto install on, dontindex.mad and a folder with the sync my ride files.
Does that sound like it might work.
Update firmware on machines at work and that is easy just a case of plug in any updates show , press update and done. A few seconds later everything working.
My Mac is a few years old now so not sure if that is why I cannot follow the instructions word for word from Ford ?

If it now looks like the picture below, it’s how I had it when I installed, then should be ok (in theory!)

The Ford instructions don’t seem to take into account how the Mac unzips the file (or the fact it can auto unzip).

Our Ford Puma Forums are free to join and open to all.